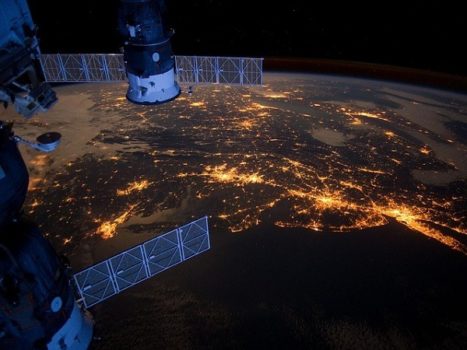 Imagine it’s a warm summer evening about 10 years from now.  You’re lying back on the soft grass, listening to the gentle chirp of crickets and a friend gently strumming a guitar over by the campfire.  You look straight up to enjoy the full glory of the star-studded velvety-black night sky. But, what do you see? Blobs of light moving across your vision, criss-crossing in all directions from one horizon to the other. And, not a star to be seen. Welcome to the age of mega-constellations.  These are not the constellations you have heard of, like the Big Dipper, Orion, or the Pleiades (Seven Sisters). These moving lights represent thousands upon thousands of small satellites called ‘ Satellite Mega Constellations’. In this article, we will explore what these mega-constellations are, why they are being made, and the dangers they pose to our planet.

What Are Satellite Mega Constellations?

So, what is a mega-constellation?  Well, you have surely heard of Starlink, the huge project from SpaceX to launch a network of thousands of small satellites into low orbit in the next few years. Their goal is to have 12,000 of them up there by 2027, and then over 40,000 a few years after that, in order to make broadband Internet available pretty much everywhere in the world. These satellites are set to orbit just 550 km above Earth, which is far lower than present-day ones.  This cuts latency time and improves Internet speeds seen when using land-based fiber-optic cable.

The word “constellation” is used in the name “mega-constellation” to describe the fact that the satellites fly close together to form a network. They communicate with each other, rather than sending data back and forth from Earth’s surface, making their operations much faster than conventional satellites. Present-day satellites used for Internet connection are much larger and more expensive to build.  They are placed in geostationary orbit, meaning that they rotate at a certain speed in sync with Earth’s rotation at all times. Another striking difference is that they sit at over 20,000 km above Earth, making data transfer from the satellites to us and back very long and slow.

Starlink is not the only company getting in on this potentially lucrative game. There’s a huge list of companies vying for their part of the mage-constellation pie, including among others, Amazon, OneWeb, Telesat, and even Facebook.  If all these companies really get to do what they are aiming to do, there will be over 100, 000 objects launch into low orbit in the next few years.  To put that in perspective, the Union of Concerned Scientists (UCS), which records active satellite numbers, stated that 2,666 active satellites were orbiting Earth in April 2020, 1,918 of which were in low Earth orbit. That’s an awful lot less there now than there will be very soon!

Are Satellite Mega Constellations A Problem?

There is an upside to having these massive numbers of satellites flying over our heads. They have the possibility to revolutionize the lives of millions of people around the globe who have limited, or no access, to an Internet connection, to improve global communication, education opportunities, and specialized healthcare in remote areas. At what cost?

One of the most obvious issues for our planet, if all these mega-constellations get off the ground, is the dangerous creation of even more orbital debris than is up there right now.  Imagine 100, 000 objects on a similar low orbit, with a short life span, whizzing around at thousands of kilometers an hour. Something is bound to hit something else at some point, creating an explosion of more space trash. If you put such a large number of satellites up, chances are, some of them will malfunction. Therefore, they can’t be moved to a safer orbit in the event of an imminent accident. It is an infinite vicious circle. If more debris is created, it then increases the likelihood of more debris being created.

However, this will not happen suddenly, which makes it even more concerning in a way. As more space trash is formed, space flight and satellite launches will become more dangerous and expensive, until the cost and danger become prohibitive. The debris could conceivably seriously disrupt navigation and global communications that we depend on.

If nothing is done to regulate the number of objects being launched into space in the near future, by the time we realize that it is a problem, it may just be too late.

Another problem that astronomers around the world are upset about, is the degradation they will experience in being able to carry out meaningful research if mega-constellation launches take off (so to speak).  Just think of the impossibility of taking a long-exposure photo of a faint nebula or galaxy light-years away from Earth when you have shiny lights streaking across the screen continuously.  Even trying to see a far-off unknown planet by using a process called “The Transit Method” when a dark planet, light-years away, causes a very brief decrease in light from a star when it crosses in front of it, would be very difficult.

Even if you are not interested in discovering the secrets of the Universe, the fact that astronomers cannot see properly into space could have a serious impact on Earth, literally.  When satellite mega constellations are streaking light trails across the sky, potentially dangerous asteroids heading for Earth cannot be seen easily by space-gazers.  It is true that right now, we don’t have a Bruce Willis kind of guy to go up there and blow up an asteroid on a fatal trajectory towards our planet, but the technology to divert these dangerous objects is not far off.

Now for the last problem that also inadvertently affects our lives. The light pollution caused by 100,000 dots of artificial light gliding through the sky is not only a problem for astronomers and amateur stargazers. Many migratory animals use the stars for navigation, from lowly dung beetles to seals, and many types of birds. Yes, that’s right, even Dung Beetles!  Apparently, when they smell some fresh dung, they fly as quickly as they can to it, then use the stars as navigation to roll it back to their burrow as quickly as possible to avoid their prize being stolen from them. So now you know.

You may think that it’s no big deal if a Dung Beetle gets lost because they cannot see the stars properly anymore.  Even the smallest insect has its place (except for maybe mosquitoes!).  If the Dung Beatle can’t make it back home, then their babies will die of starvation, meaningless Dung Beetles to clean up dung. The dung attracts flies, which pass on diseases to animals in contact with it.  Not only that but also the fact that Dung Beetles bury their dung balls, improves the soil structure and nutrient content in the soil, which also affects plant growth.  Ultimately, the whole ecological system they live in is deeply and adversely affected if a Dung Beetle can no longer see the stars.

All because of human-made mega-constellations.

Is this really what we want for our future?