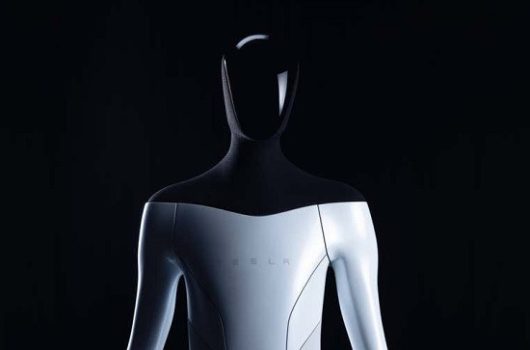 Elon Musk on Thursday unveiled their first Tesla Bot which is powered by Tesla’s Full Self–Driving Computer. His company is known for its efforts to accelerate the world’s transition towards sustainable energy, so think of this idea as an extension to make it happen. A functioning version didn’t make an appearance, though there was a guy who made a bizarre dance while being dressed like one.

What We Know About The Humanoid Robot, So Far

The surprise came up during the final hours of Tesla’s AI Day presentation, with Musk only providing little information about this bipedal gadget. The 5-foot-8-inch bot, codenamed Optimus Prime, is expected to weigh less because its components will come from lightweight materials. Aside from a screen to display vital info, its head will be kitted with multiple cameras to provide a 360° awareness. Other topics like A. I. upgrades in Tesla’s autonomous cars and the Dojo supercomputer, which trains cars to navigate the city streets on a macro scale, we’re also discussed.

Three slides were dedicated on the robot alone, and Musk had made sure that the bot won’t jeopardize human safety, claiming that you could even both outrun and overpower it. He was one of the people who predicted that bots and artificial intelligence will one day rule the world, even calling them “the biggest threat civilization will ever face”. So, if what they’re doing here is creating slow yet useful, and strong yet easy to overpower robots, then I guess the dangers won’t be that big of a deal. One particular slide said the bot would handle dangerous, boring, and repetitive tasks. For example, asking your bot to buy you some snacks, or similar errands like that. It’s not necessarily “dangerous”, but good enough if you need extra hands in a jiffy.

Bots have always been our fascination, especially in pop culture. But we’re still far from creating the ultimate and universal one that’s of the same degree of intelligence and likeness as us. A. I. development has been on a rapid pace, but today’s bots are still far from having the general abilities of even a child. They are still stuck to basic tasks and errands in simple environments like carrying goods or vacuuming a house.

That’s why the company plans to spearhead A. I. and robot R&D. You can even join the development team by clicking here if you feel you’re fit for the job.

The Tesla Bot is only one of the many projects planned for release in the near future. And let’s not forget about the Cybertruck. Even though the hype is strong, Musk’s reputation of overpromising and missing deadlines might just give you some doubts in the end. So far, there weren’t that many aggressive claims for when Tesla’s autonomous vehicles would be ready for mass production. After all, it’s still under the investigative eye of the National Highway Traffic Safety Administration and some senators on whether Tesla’s marketing of its A. I. driving software is legit. The senators called for an investigation just days after the agency made its own probe about Tesla’s Autopilot system.

Regulators have identified about 11 crashes involving Tesla’s self–driving software, adding some doubt whether its Autopilot system is reliable or not. Despite the crash issues, the company had still reached a net income of $1 billion. That seems like its sales weren’t affected that much at all. It’s hard to say how far off such a not-so-distant future might be, but there’s a huge gap between a few slides and an actual humanoid robot. It’s probably going to be a long while before you can “acquire” your own humanoid robot butler, but Musk said we can expect a working prototype come 2022.