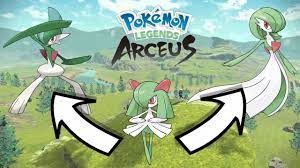 How To Evolve Kirlia In Pokémon

How To Evolve Kirlia In Pokémon? Pokemon Legends Arceus has a variety of ways to evolve your character, which is consistent with the Pokemon franchise as a whole.

In Pokémon Legends: Arceus, Kirlia can evolve into either Gardevoir or Gallade. The gender of the Pokémon will influence its evolution.

Both Gallade and Gardevoir, Kirlia’s two ultimate forms in Pokémon Legends: Arceus have their unique set of prerequisites for their development. Kirlia is one of those Pokemon that has the potential to evolve into either Gallade or Gardevoir, and the prerequisites for each of those evolutions are different. Other Pokemon even have the chance of more than one evolution tree being conceivable.

If you’re playing Pokemon Legends Arceus, you’ll want to know how to evolve Kirlia into either Gallade or Gardevoir. So in this article, you will find detailed information on how to evolve Kirlia in Pokemon. But before we go into details, let’s get a brief look into Kirla; its physiology, behaviour and natural abilities.

Kirlia, a Fairy- and Psychic-type Emotion Pokémon in Pokémon Legends: Arceus, has the potential to evolve into either Gallade or Gardevoir under specific circumstances. Wild Kirlia can be found in the Shrouded Ruins of the Crimson Mirelands or at the Snowpoint Temple and Heart’s Crag of the Alabaster Iceland. However, Ralts, Kirlia’s initial evolution form in Pokémon Legends: Arceus, is far more likely to be encountered.

Kirlia is a little, humanoid Pokémon. She has a full white upper torso and arms, but her waist and legs have a pale green tint, giving the impression that she is wearing tights. Kirlia looks to be wearing a mini-skirt around her waist, which is reminiscent of a traditional tutu. Although her pre-evolved version of Ralts had shorter “hair,” this one’s pale green “hair” is much longer and more trimmed. The central section of Kirlia’s face is covered by her hair, but her crimson eyes are still visible. The pink horns that were formerly situated in the middle of Ralts’ head are now situated on each side of Kirlia’s head, creating the impression of huge hair clasps. However, rumours have it that it looks like a ballet dancer.

When the weather is nice, Kirlia likes to get up and dance. They grow even more attractive when they are exposed to their trainers’ positive feelings. The vast majority of Kirlia reside in urban areas, although a small minority is found in the woods and other natural habitats.

Kirlia’s ability to regulate psychokinetic abilities is facilitated by her brain’s advanced development. They can use their horns to project images of paradises and mirages, while warping the air around them, using their enhanced mental abilities. It is said that their psychic ability is so powerful that it can tear realms apart and even predict the future.

How To Evolve Kirlia Into Gallade/Gardevoir in Pokemon Legends Arceus

When Ralts hits level 20, it will evolve into Kirlia, and when Kirlia reaches level 30, it will evolve into Gardevoir. In Pokémon Legends: Arceus, leveling up your Pokémon is as simple as engaging in combat and gathering activities with them. Those who seek to hasten their leveling can use Kirlia Exp. Candy variants or Rare Candy to do it faster. You can improve your Pokémon’s experience pool based on what kind of candy you’re given. Despite its rarity, rare candy can quickly raise a Pokémon’s level regardless of how much experience it has gathered so far.

However, the prerequisites for Gallade’s evolution are a little bit more complicated. A Dawn Stone from Pokémon Legends: Arceus is required to evolve Kirlia into Gallade. An extremely uncommon item, the Dawn Stone may be used to transform characters like Kirlia and Glalie into Gallade and Froslass, respectively. That being the case, you must find a Dawn Stone, which can be done two ways.

The first option is to utilize Ursaluna to search. However, this method does not guarantee success.

The second way to get the Dawn Stone is by exchanging 1,200 Merit Points for it at the Trading Post in Jubilife City. Once you get one, all you have to do is use it on a male Kirlia to evolve it into Gallade.

The Trading Post, unlike the village’s basic store or craftwork shop, accepts Merit Points instead of Poké Dollars. To get Merit Points, you must gather Lost Satchels dispersed across Hisui. Trainers will get 50-100 Merit Points for each satchel discovered. Players can purchase a Dawn Stone from the Trading Post after accumulating 1,200 merit points in Pokémon Legends: Arceus.

Kirlia’s evolution into Gallade requires more than just the Dawn Stone. For the evolution to be successful, players must make sure their Kirlia is male. Trainers’ male Kirlia will evolve into a Gallade after receiving a Dawn Stone. While both Gardevoir and Kirlia are Psychic/Fairy-type Pokémon, Gallade is a Psychic/Fighting-type Pokémon, making it resistant to fire and rock-type attacks but vulnerable to ghosts and dragon-type attacks.

When comparing Ralts and Kirlia, Gallade has always been the more difficult of the two to evolve. Considering the fact that you simply needed to raise the level of your Kirlia for Gardevoir to evolve, Gallade required a few other things before it evolved.

In order to pull off Gallade, you’ll need to locate a male Ralts or Kirlia. Because a Gallade can only be a male, you will have to put in the effort to locate a Pokémon of that precise gender.

You’ll also need a Dawn Stone, which you can use on your male Kirlia in order to evolve it into a Gallade. That’s all there is to it, you now know how to evolve Kirlia. Leave a comment if you are still confused.