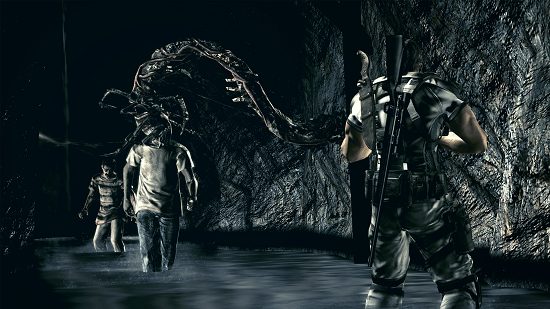 We’ve learned in Resident Evil 5 that the Uroboros Virus can have an unpredictable range of risks and side effects. Indeed, it’s one of the most dangerous viruses the RE series have introduced.

The Resident Evil series has taken the idea of bioweapons and apocalyptic survival horror to a whole new level by the T-Virus. The game used to revolve around this virus strain, with attributes such as mutations and reanimating the dead. However, more and more strains were eventually added as the series progresses, including the Uroboros, which is by far the most dangerous one.

Following Resident Evil 4, it appeared that the virus would continue to mutate and affect the human race in many ways that make creatures and zombies seem like a walk in the park. Protagonist Chris Redfield and Sheva Alomar have encountered the deadly virus firsthand on Resident Evil 5. As a Progenitor strain, it’s meant to “enhance” the subjects by giving them superhuman abilities. However, its extreme unpredictability has made it more of risk rather than aid.

There’s a 50-50 chance that your body will get “accepted” by the virus. If you aren’t destined for the virus, it will violently mutate and eat you up. Much like the Greek serpent, the virus will turn its hosts into massive creatures with tentacles. What happened to Ricardo Irving is an example. While they are gargantuan and can be really intimidating, they aren’t that indestructible. The massive orange pustules that grow from their body can be fired upon, creating massive damage, and killing the host.

The Uroboros can be used on dead tissues, too. It operates the same way as living tissue, turning the hosts into massive creatures. The only way to defeat such threats is by exposure to massive amounts of heat, such as explosions. These methods helped eliminate Albert Wesker when his mutation became uncontrollable.

On the other hand, when hosts are lucky enough to be compatible with the virus, it will give them superhuman capabilities like durability, speed, strength, and regeneration. Also, the hosts won’t violently transform into some creature; instead, they would’ve retained their human form with the addition of glowing, slitted eyes. This should’ve worked on Wesker if only he didn’t mix two types of viruses. For years, Wesker has been an advanced human, thanks to the Progenitor virus in his blood. However, by mixing the Progenitor and Uroboros, his mutation went too far.

Due to the Uroboros Virus being highly volatile, it quickly spread worldwide, killing billions of people in the process, and only managing to enhance a lucky few. However, the risk factor was so great that Chris and Sheva put an end to it. While it only appears in RE5, its high degree of volatility and devastation makes it one of the most dangerous viruses in the Resident Evil world.