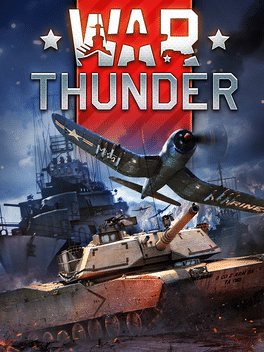 Carpet bombing anything that moves below has never been so good, especially when it turned the tide of battle in your team’s favor. And what’s more to War Thunder, you might ask? How about simulating a battle scenario right in front of your computer screen?

So, when it comes to full, immersive battles, nothing beats War Thunder. This vehicular, combined-arms video game provides anything unlike any other – from arcade game modes, to historical battle – all in a simulated way. You can fight with other players, test drive a vehicle of your liking, and even try different situational bullet penetrations to help you further understand the game’s mechanics and save yourself in certain battle conditions. From nations like the United States to the Soviet Union, and vehicles such as helicopters to naval destroyers, the game has it all.

This simulator game is divided into three awesome game modes to satisfy everyone’s liking and playstyles. They can be arcade, simulator, or realistic battles.

Arcade is the easiest and most beginner-friendly way to play the game. Similar to World of Tanks, your mistakes can still be forgivable. Damage, vehicular physics and ammo replenishments are greatly simplified. Although it’s not recommended to start from arcade, this game mode is made for the easiest player experience.

In terms of damage, you might still require a few more shots (especially if you aim poorly), in order to takedown a particular target. Meanwhile, in terms of physics, you can feel a significant increase of engine boost when using all vehicles. This in turn, makes your vehicle more maneuverable and speedier than usual. For example, being able to drift Abrams main battle tank in almost any terrain. However, some realistic aspects are still retained, like bombers that are obviously less maneuverable than small aircrafts.

Lastly, you’ll know it’s an arcade when you have easier replenishment. For instance, when using a jet, you’ll still be able to reload when running out of ammo without having to go home. It’s highly advised to treat this game mode as a “testbed” to know certain aspects of the game.

This is the game mode is the “real deal,” where challenge starts and mistakes can be unforgiving. Due to these, Realistic game mode is recommended for advanced players. When one is still a beginner, it is highly advised to start from this game mode in order to “open your eyes” about the best thing that the game can offer you. It can also help avoid some game “shock” when deciding to jump from arcade mode to realistic mode.

Aside from that, simulate some historical battles that really happened in World War 2, such as the Battle of Stalingrad where you can either play as Soviets or Germans. However, if you want some variety battles, you can either choose Air Realistic Battles or Ground Realistic Battles. The former is battling different types of aircrafts while the latter is among a wide variety of ground vehicles of any available country. Take note that you can only replenish your ammo if you land or drive back to base.

Simulator mode is the hardest mode but shares a lot of common features in Realistic Mode as well. However, you will have more restrictions in your interface and controls, like only being in first-person mode in a cockpit or external turret gunner views. Moreover, tags are not given for enemy units while your allies tag can be only visible if you’re near them.

There are two types of shells you must remember: Kinetic energy shells and chemical energy shells. It is important to master each type of ammunition because a certain ammunition type might not be effective when used in the wrong kind of target. For example, you might be able to remove the layered armor of an enemy tank when using high-explosive Squash Head (HESH) rounds, but might still fail to kill the crew or disable the tank itself, giving it a chance to fight back.

Another example is using anti-tank guided missiles instead of kinetic rounds, if the target is above firing range? Not only it hides your presence when performing an ambush, but also maintains the distance between you and your adversaries. Other ammo types include incendiary for planes, and high-explosive in ships.

Smoke is one of the features your vehicle can have, especially the higher tiered ones. It can either be used for offensive or defensive purposes. When used offensively, you can conceal your movement, and even perform a feint attack when using smoke. Meanwhile, it can help you escape to a safe place when used defensively.

Combined arms, especially when played in realistic mode, is one of the best features War Thunder can offer. You can grind a wide variety of vehicles as you progress up the battle ratings which are the means of determining the kind of matchmaking in the game. Some of these are as follows:

Tanks make up the vanguard of most ground attacks. They are built to brawl other tanks, although softer targets are more than welcome as well. The tanks of War Thunder are far from those in World of Tanks. For example, World of Tanks may include “paper/blueprints tanks”, whereas War Thunder don’t. Aside from that, War Thunder includes main battle tanks (MBTs) with their smoothbore cannons, modern firing systems, amphibious capabilities, and different types of armors, whereas its counterpart doesn’t.

Tank destroyers are excellent for engaging tanks and other hard targets. They can either be wheeled or tracked. Additionally, their armaments can range from having guided missiles to being multi-weapons. Some tank destroyers also have amphibious capabilities to enable them to appear at the most unexpected parts of the map. However, most tank destroyers are soft targets, while some don’t even have a rotating turret.

Self-propelled anti-aircraft guns’ main job is to provide your army with an “umbrella” against enemy planes. In short, they give air cover to help avoid bombings and preserve your lines. SPAAGS, such as the Tunguska, not only can provide maximum firepower in the air, but also provide fire support against ground targets as well.

Aviation can range from fighters like interceptors, to bombers like torpedo bombers or frontline jets. They can be unexpected, and are hard to hit. They can be comparable to the self-propelled guns of World of Tanks, which are infamous for ruining one’s day, when tolerated. That’s why it is important to have an effective air cover at all times, especially during late games. Without an organized air cover, you won’t stand a chance swatting these annoying, pesky flies.

Helicopters can engage both ground and air targets, depending on the armament. Some are even equipped with night vision to enable them to see their “prey” easily. They are the tanks’ worst nightmare. However, they can be easily taken down by SPAAGs, even by tanks themselves.

War Thunder’s naval vessels also include a ton of variety for you to choose from. From small water crafts like barges and gunboats, up to the largest ones like frigates, destroyers, and heavy cruisers, you can dominate the waters with your team with the right fleet composition. However, the situation of naval battles is far from those in World of Warships which is more preferred at the moment. Hopefully, the upcoming update will revamp the naval battles, and fix these nuances once and for all.

Although the game can be played by almost every desktop computer, if you want to be competitive enough it is highly recommended to have a dedicated gaming rig for it. In War Thunder you need to have a keen eye for small details, especially when entering realistic battles, because your enemies might be blending well with the surroundings. Always remember that this game frequently demands a first strike at a suspicious area, rather than waiting for “that area” to shoot at you first. Having a good rig is required to be able to see further and have that first shot before something regrettable happens.

Spending about 200 hours in this game is more than enough to have a reliable judgment. The tech tree grinding is not that harsh compared to its counterpart. Also, I like that the game features daily rewards without requiring you to enter a battle. Additionally, the realism that the game offers is also A+. There are no “premium rounds” here as well, so you don’t have to complain about some aggressive pay-to-win scheme like World of Tanks. However, it might still take a while to adjust from arcade to realism, especially when you’re good at arcade games.

Overall, the game is excellent just like its counterpart. If you want realism, this game offers it at best. On the other hand, the arcade vibes still go to World of Tanks. There are rumors that the game’s current battle ratings will be further extended, with the addition of submarines in naval battles. Moreover, there are reports that this game has a certain nation bias as well, especially in the naval aspect. Hopefully, everything will soon be ramped and balanced in the upcoming New Power update.