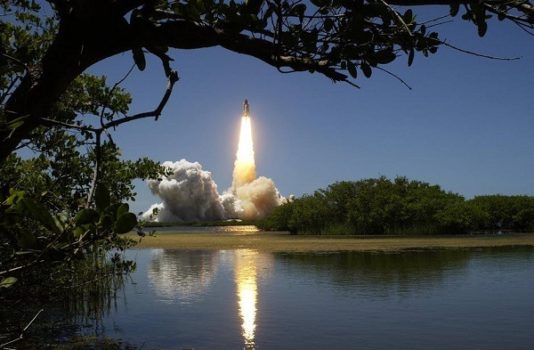 The system, called Demonstration Rocket for Agile Cislunar Operations, uses nuclear fission instead of the traditional rocket fuel for a faster and more efficient rocket propulsion system. NASA sees the technology as an effective system that could finally take humans to Mars and beyond in less time. Earlier this month, DARPA said it assigned Lockheed Martin, Blue Origin, and General Atomics for the job. The mission is to send DRACO to low-Earth orbit by 2025.

General Atomic will handle the concept of the propulsion subsystem and the preliminary designs of the nuclear reactor. At the same time, Lockheed Martin and Blue Origin will each develop their spacecraft designs.

The NTR has been an idea for quite some time already. According to the Department of Energy:

NTP was first proposed back in the 40s. By the 60s, the Atomic Energy Commission (AEC) and National Aeronautics and Space Administration (NASA) had tested rockets for the Nuclear Engine for Rocket Vehicle Application (NERVA) program but canceled the project before engineers could proceed to build an actual one. That’s because when it comes to launching a reactor with highly enriched uranium or plutonium to space, it raises eyebrows which makes sticking to chemical rockets good enough for a space program.

But now that more minds are beginning to acknowledge its importance and since it’s now set for funding, the NTR’s time has come.

In the past, the idea of a nuclear-powered spacecraft exploding during launch and scattering deadly doses of radioactive material everywhere made nuclear propulsion unfeasible. However, modern technology can now produce a safer version of uranium that cannot be converted into a weapon of mass destruction (WMD). The uranium and its reactor would also not activate during launch, making it safe when not in orbit. DRACO will make sure that even if it fails during orbit, the radioactivity will have decayed before falling back to earth.

The Pentagon is also developing a spacecraft that can be repositioned in space faster than today’s rocketry. As its name implies, DRACO will be orbiting at a cislunar level. The NTR’s higher boost ratio will allow the spacecraft to move faster across the expanse of space.

If DRACO became successful, there’s a chance it could be used in the civilian sector as well. NASA believes that nuclear thermal propulsion could cut planetary missions’ expenses by half. DRACO would then join a long line of DARPA ideas to provide more benefits to the world outside the military.

5G and Edge Computing - A Vision for the Future
Latest Mercedes Benz Showcar At CES Is An Avatar-Inspired Spectacle
Artificial Intelligence And Ethics: When and Where Does It Begin?
China's Own Digital Currency About to Be Released
Supercar Marque Experiments With Volcano Fuel To Run Its Future Hypercars
Tags: But When? future tech NTR Nuclear Nuclear Thermal Rocket Pentagon Rocket Space space exploration Tech news Technology The Pentagon Plans To Launch A Nuclear Thermal Rocket