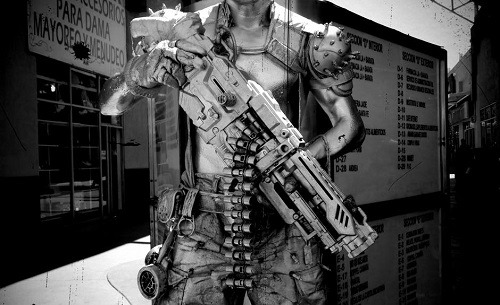 The U.S. Military is working on living animal tissue as means to move robots. Its Army Research Lab believes that “Frankenbots” could someday use real muscle for better robot capabilities, instead of mechanical tracks, arms, wheels, and other systems to travel across the warzone. This concept, which might be disturbing to some, is an example of “biohybrid” technology.

Today’s robots, especially ground-based ones, navigate the battle using tracks and wheels – methods of locomotion borrowed from vehicles. But according to a source, researchers are already “at the point of experiencing diminishing returns in the field of robotics which rely on batteries as their main power system and tracks as their means of movement.

Current Robotics And Its Limitations

Current military robots still rely on batteries to power their motors to drive axles and turn wheels. But a “Frankenbot” would replace this entire system with lab-grown muscle tissue to power their limbs Chemical actuation or electric impulses would kickstart movement.

An advantage of using lab-grown muscle tissue is flexibility. Tendons can give, pull, and flex, as an animal moves over different kinds of terrain where there are many unexpected problems. A real robot can’t do that since they mostly rely on shock absorbers.

Robots may be able to perform heavy-duty tasks that humans can’t, but it’s not about the magnitude that an organism can do such things. To date, no robot’s capable of diving into an unknown space and adapting from it. Culver added that Biohybrid robotics is still in its infancy.

The muscle can come from any organism depending on what the military needs. The army plans to focus on four-legged platforms first. And currently, they are still finding more partners for future projects.

Culver said that the project has a great theoretical basis from reality. He added that some of the tools involved in the development have already been tested, and they’ve proven to be effective. However, more time and a lot of learning to do before their team starts to make prototypes.

Frankenbots – Are We Ready For Such Things?

Frankenbots could show great promises, but there are drawbacks. Are we ready to interact with robots with legs and actual organic living tissues across the battlefield? Machines work for living things, and it’s kinda disturbing to think of muscle tissue being an essential part of a robot– especially one that kills.

For now, the military will have to stick with their current robots for their field missions. Both the military and Boston Dynamics have made great strides in using robots for intelligence and bomb defusal.