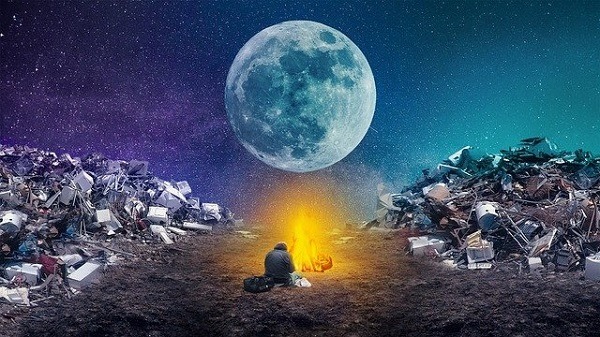 Remember that Sci-Fi movie called Gravity?  If you missed it when it came out, it’s the one where Sandra Bullock gets flung through space from one derelict space station to another, thanks to the first one being hit by space debris. And, she does all that while keeping her hair and make-up perfectly in place. Not that her hair or her mascara is really the point. The point of the movie is that the idea of space debris hitting an actual space station, or one of the many satellites orbiting Earth, is not a science-fiction story to scare would-be astronauts at all. It is a very real possibility as every day more and more junk get literally ‘lost in space.’

What’s all this trash that is orbiting our planet?  And why is it there in the first place? These are all questions that we are going to look at in this article. However, the most urgent questions we all should be asking our leaders and space occupiers is, “What can be done to get rid of it?”, and “How can we stop more debris from polluting our spatial backyard?” So, let’s start at the very beginning (it’s a very good place to start).

The First Piece Of Space Junk

The very dubious honour for the creation of the first space debris orbiting Earth goes to the Soviet Union. On August 4, 1957 they launched Sputnik I, the first satellite to orbit our planet. It spent three weeks traveling above our heads, sending back data to help scientists calculate how dense the atmosphere is at low orbit, and what effect it has on satellite life, among other things. Once its batteries ran out, it mutely flew around the Earth for a few months until it fell back towards Earth and burnt up in the atmosphere. Indeed, this debris did not remain in orbit around us, but the launch kicked off a furious Space Race between the United States and the Soviet Union. They spent the next decade throwing a barrage of satellites and rockets wildly up into space. This all cumulated with the USA landing people on the moon’s surface.

The official Space Race ended in 1975 when a team of Soviet cosmonauts and a team of astronauts from the USA docked their spacecraft together in the skies somewhere over Western Germany and shook hands to symbolize that enough was enough. Since that time these powerful countries have been working together to develop technology to further our knowledge on “The Final Frontier”. However, there has been a casualty that has trailed along after this incredible progress, like an unshakable stray dog. That casualty is space debris; trash that we’ve been abandoning unintentionally, or deliberately leaving behind, as we roar out into the black void that surrounds us.

What Is Space Debris?

The space debris that orbits our planet at the present is made up of over two million bits of human-made trash, ranging from tiny pieces as small as paint flecks and unburnt particles of rocket fuel to the largest tracked piece, which is an out-of-service satellite the size of a double-decker bus. The debris has accumulated since the 1950s. Every time a rocket or satellite is sent into orbit more debris is created as collateral damage, even if the mission is a success.

These bits of junk multiply that they often collide, creating even more debris. Even the smallest pieces can cause harm. They move at such high speeds that when they hit surfaces such as solar panels that keep satellites in action, the collision scratches the panels, making them less effective. If enough of these impacts occur, they have the power to disable the satellite. The larger pieces of trash cause even more destruction. Since 1961 there has been an average of 9 “in-orbit fragmentation” events each year.  That includes junk that has exploded on its own creating many smaller pieces of trash and actual collisions between two objects.

To get a good idea of how many larger pieces are up there right now, have a look at this excellent interactive 3D map from Esri. It shows all the satellites and larger pieces of debris that are orbiting around us in real-time. Be careful though. Once you start looking and clicking, it’s difficult to stop!

Can ISS Astronauts Sleep At Night?

The International Space Station zooms around us in a low elliptical Earth orbit, averaging around 400 km at its furthest from our planet, which saves it from encountering the worst of the debris. The highest concentration of junk sits at a much higher altitude; from 800 km above us and higher. This is excellent news for the astronauts on the ISS, but they still have to stay on high alert on quite a regular basis.

The ISS can deflect small particles with a protective layer of metal called a Whipple Shield that acts as an open umbrella to deflect small bits of debris. Last year, however, the astronauts on the station had to perform three manoeuvres at separate times to avoid dangerous debris that was flying toward it at more than 29,000 km/h. Luckily for the people working on the Space Station, the US Department of Defence tracks most of the debris flying near them and gives them an early warning if something is heading their way. This means that the astronauts can sleep calmly during whatever their version of the night is.

What Can Be Done About All This Flying Trash?

While it’s true that every year about 9000 tonnes of space junk burn up in the Earth’s atmosphere as it falls out of orbit, a startling amount is still up there creating havoc, and the amount is continuously increasing. Back in 1978 two scientists came up with a theory that became called the Kessler Syndrome, after one of its inventors. The summary of what they proposed was that because of continued collisions of space debris, more space debris would be created, causing even more collisions. This would continue infinitely until our access to space was completely blocked.

You can observe a similar effect on Earth in our oceans. Plastics have broken down into smaller and smaller particles creating microplastics, that are now found even in the deepest trenches. Now, we don’t want our seas coated in plastic, nor do we want our near-space littered with trash, so what’s being done?

Well, the plastic problem is for another article, but for the space debris, for the moment the answer is, not that much…yet. But, it’s not all bad.  There is a large amount of research and development going on all over the world to find ways to get the debris out of space.

What’s On The Horizon?

There are all sorts of wild and wonderful devices being worked on to capture out-of-use satellites, bits of leftover rockets, and all the other debris flying around above our heads.  Some of it seems as though it comes straight out of a Science-Fiction story!  From a satellite that sprays out foam to capture debris and drag it back into Earth’s atmosphere to burn up, to a solar-powered sail that flies along trapping the trash like a big butterfly net, to an electrodynamic, electricity-generating tether that slows junk down so that it drops into lower and lower orbits until it burns up.

If all these inventions work, we could be seeing an awful lot of shooting stars in the next decade, which is fun to watch and good for the space around our planet.