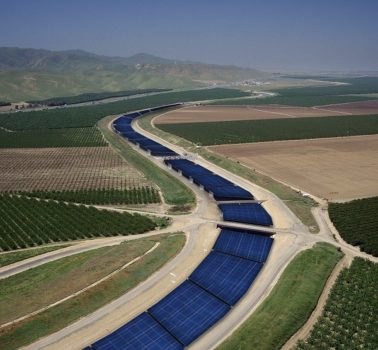 Climate change and water scarcity have always been a hot topic, especially in the Western part of the United States. The region’s climate is warming – faster than what’s predicted, a severe drought is underway, and groundwater is being overpumped without even giving it a chance to be replenished.

It may sound weird, but what if we try a solar panel – water canal duo in drought-prone California? Instead of allowing the sun to “freely” evaporate the waterline, why not cover it with solar panels to save the precious and make it power up our homes? It’s like hitting two birds with one stone!

What Are Solar Canals, Anyway?

Real estate has always been a challenge when developing large-scale solar resources. That’s because large amounts of electricity must be distributed over large swaths of land. Starting the project in major cities may prove difficult due to the lack of open space. In addition, there are also environmental concerns when covering open land.

Until now, many scientists are still looking for optimal solutions to this issue. Island countries with little room for expansion, especially Singapore, are experimenting with floating solar arrays at sea and lakes to minimize land use. Even some African nations are considering adopting the idea of solar canals to help minimize water evaporation.

But, is the solar canal project really worth it for the state of California? Well, researchers at the University of California did the math to see effects that would occur in the long run. They believed that the project would provide clean energy and slow down water evaporation rate at the same time.

See also  England To Be The First Country To Require New Homes And Offices To Include EV Chargers – Perhaps By 2022.

According to Michael Kiparsky at the UC Berkeley School of Law, droughts are always part of the nation’s history and one of the consequences of climate change. It just so happens that they’ve become more frequent than simulated.

The plan was to suspend cable trusses to position the solar panels above the waterline. According to a source, data gathered from India’s $18 million small-scale water canals has proven that the 750m canal project indeed has reduced water from evaporating and protected aquatic weeds, further lowering maintenance costs.

The scientists have already started scouting key points in the Central Valley, all while considering sunlight, temperature, energy costs, and water evaporation rates. They found out the 4,000-mile canal stretch can produce a total of 13 gigawatts of electricity, meaning that’s already half of the state’s goal for 2030 towards decarbonization. The solar canals would also save about 63 billion gallons of water annually from going to waste.

They added that the benefits in the long run far outweigh the costs associated with the building’s infrastructure.

Solar energy has always been crucial in helping California meet its sustainability goals, hopefully for more years to come. It makes up about 20% of the state’s total electric production, but many believe that it’s far from being enough and the best decision we can make is to proceed with the solar canal project since it’s still untapped real estate.

Of course, water evaporation will always be present. However, as evaporation occurs, it cools the solar panels above it, making the entire infrastructure optimized most of the time when converting sunlight into electricity.

Although all the benefits mentioned may make the proposition of a large-scale solar canal project for drought-prone California seem like a no-brainer, some are still doubtful of its efficacy: total infrastructure costs and the amount of energy it can generate are just some of the few concerns at hand.

How Did London City Get So Smart So Quickly?
Here’s Why EU Want All Devices To Use USB C For Charging
How 'Phytomining' — Metal-Eating Trees — Could Help Power The Future
Skylum Launches A Brand-New Photo Editor – Luminar AI
Solar-Powered Refrigeration Trucks Could Be The Future Of Large-Scale Food Transport
Tags: California clean energy cliamte change Eco-Friendly evaporation India Innovation solar canal Solar Canals In CA Could Save Billions Of Gallons Of Water Per Year And Fight Climate Change. Here’s How solar panel University of California USA water water canal