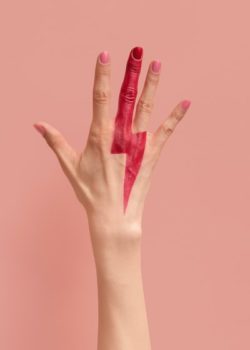 Future wearable devices might not have a battery. Instead, you will be the biological battery.

Scientists at the Colorado University Boulder developed a wearable tech that’s powered by our bodies. It uses thermoelectric generators (TEGs) to convert body heat to electricity.

It all started out with a base of stretchy polyimine. The scientists then stacked a series of super-thin thermoelectric chips into this material while being connected via liquid metal wires. The outcome was a cross between a bracelet or ring with a miniature motherboard.

How The Wearable Tech Works

As you wear the device, the flexible, malleable circuitry inside will turn your body heat into electricity. Meanwhile, as you move, the special material inside will heal and reconfigure itself to keep it from breaking down.

The TEG has similar stretchable properties just like human skin. That means you can comfortably wear the device without having to worry that the device will break down, according to their study which appears in Science Advances. As a part of the gadget turns your body heat into electricity, it guzzles up solar energy at the same time.

Whenever we use a battery, it will eventually deplete over time and eventually, we’ll have to replace it. That’s why Jianliang Xiao, associate professor of mechanical engineering at CU Boulder aims for his wearable devices to power up without the need for external batteries. He believes that our body’s natural heat is enough to provide constant power.

Consider the human body’s natural conduction process. To maintain a constant 98.6°F, the body must regulate a strict balance between heat loss and heat gain. And because the body isn’t that efficient enough, 75% of the energy it produces is lost through heat.

TEGs use a difference in temperature to turn energy into power, just like the surrounding air versus our bodies. To establish equilibrium, heat must dissipate into cooler locations, then the TEGs will capture these energized particles along the super-thin thermoelectric barrier.

The wearable tech generates 1V/cm2 of skin space. It’s not that much, but enough to power watches and fitness devices.

He added that its mechanism is similar to Lego® whereby power can easily be boosted by adding in more blocks of generators. That will also allow for customizations.

This is not the first attempt Xiao made to meld human with robot. Previously, he and his team have worked on “electronic skin” wearable tech that looks and feels like that of a human’s. However, the artificial skin must first be connected to an external power source to fully function.

While there are still quirks that needed to get fixed, the group thinks that their wearable tech could appear on the competitive market, five to 10 years from now.

He said that they’re trying to make their products as cheap as possible while staying eco-friendly at the same time.