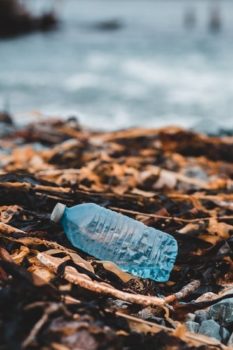 As a result, almost every part of the globe is teeming with plastic waste, a phenomenon that puts plant and animal lives at risk. Nowadays, even humans unknowingly eat, breathe, and consume plastic. Over the next decade, experts believed that plastic production will continue to increase by 40%.

But researchers are always looking for ways to solve this never-ending, global headache.

Plastics can take centuries to naturally degrade in the environment, something this new super enzyme can accomplish in a couple of days. Making new plastic involves the use of fossil fuels, which is the driving force behind global pollution and climate change, according to professor John McGeehan, a biochemist at Portsmouth University and the one who leads the study. Using these super enzymes could allow plastics to “recycled endlessly, reducing our dependence on fossil resources,” he adds.

The scientists say their “super enzyme” could be used to tackle the plastic problem within a year or two. To date, McGeehan tells sources that their discovery isn’t ready yet to be commercially viable.

How Does The Super Enzyme Work?

The super enzyme, derived from bacteria that naturally evolved to its awesome ability in chomping down plastics, enables the full recycling of them as well. It was engineered by linking two enzymes from plastic-eating bugs that were found in the Japanese waste site back in 2016. Scientists revealed an engineered version of the first plastic-eating enzyme back in 2018. But this super enzyme can work six times faster than the previous one. Researchers believe that combining these enzymes with cotton could even be used to recycle mixed-fabric clothing.

McGeehan used the Diamond Light Source, a viewing device that uses intense beams of light 10 billion times brighter than our sun, to be able to map the atomic and molecular structure of MHETase.

Researchers were then able to engineer the new super enzyme by connecting the PETase and MHETase and stitching their DNA to form one long chain. This technique is common in the biofuel industry, which uses the enzymes to break down cellulases.

But McGeehan was surprised when these enzymes can also be used to break down plastic.

This super enzyme can deal with polyethylene furanoate (PEF) but aren’t effective on other plastic types, such as polyvinyl chloride (PVC).

How Else Can Plastic Be Broken Down?

Plastic pollution and disposal are among the most serious environmental issues of any country. It’s even projected that the volume of plastic in our oceans could triple by 30 million tons by year 2040. That’s almost 50 kg for every meter of Earth’s coastline!

And although there would be no single solution, different plastic recycling strategies could help cut it down by 45%.

Scientists have also been successful in finding bugs that can munch on polyurethane, which is another common type of plastic. But once polyurethane breaks down, it releases toxic chemicals that kill the plastic-eating bacteria. Not this one, though. Instead, they use the materials as food to power the process.

In the meantime, the UN is asking for countries to look at the root of the problem, which is plastic production itself. Many countries have started restricting plastic production. After all, if there’s no plastic in the first place, then we wouldn’t need these enzymes to deal with them.