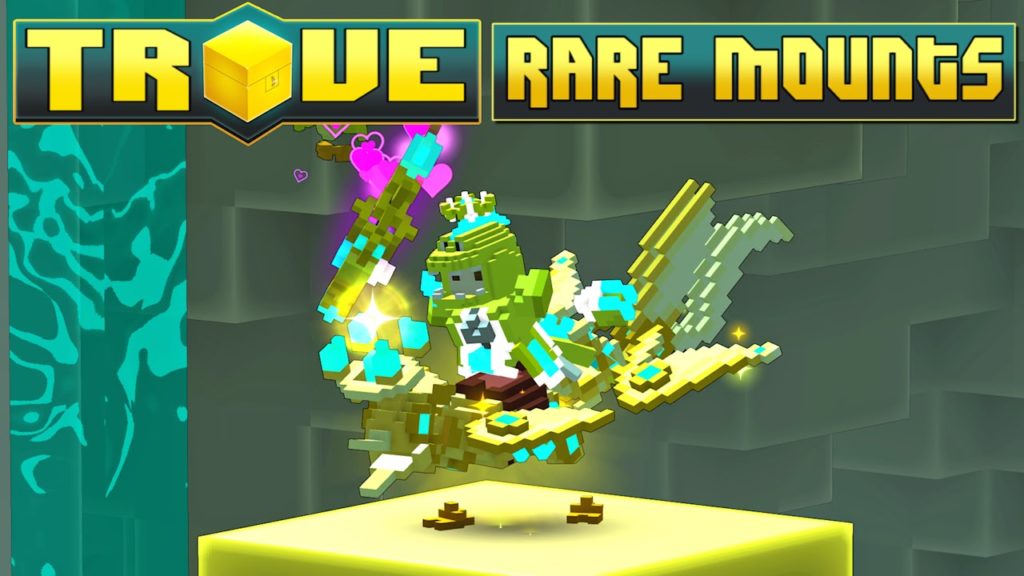 How To Get Mounts In Trove? The kingdoms of Trove are very diverse, ranging from the blazing meadows of Dragonfire Peaks to the browny canyons of Candoria. However, Trove offers a variety of travel options that can be used in order to explore any Trovian terrain in a fashionable manner.

Trove offers a plethora of different travel options, as well as a variety of different means to get them. You can build cars with just your own hands, or you can locate them already assembled inside Adventure Boxes that are dropped by defeated enemies.

So in this post, we will be talking about Mounts and how to get Mounts in Trove. After that, we will briefly talk about other travel options in Trove. Ensure you read to the end.

Mounts are elements that a player can get on and ride to move much faster than the player. This makes mounts a very handy tool for traveling. Players can improve their movement speed significantly by using mounts. It is highly suggested that novice players equip a mount as productively as possible because of the benefits they provide in terms of rapidly covering long distances.

When you press C, the screen that displays your character will open. On this screen, you can select a mount by clicking on the symbol that appears above the phrase “Mount.” After you have selected your mount, Pressing Z will enable you to mount and dismount at will with your equipped mount, and you will be dismounted if you perform an activity that is not supported by the mount.

Every mount, unless otherwise indicated differently, has a movement speed of 90.

See also  How To Make a Bowl In Minecraft

How to get Mounts In Trove

There are a few different approaches one can take on how to get mounts in trove;

l Mounts are obtainable through the Mastery progression path after you have leveled up to a certain level.

l ‘Enemies have a chance to drop adventure boxes, and each box has a 2% chance of containing one of two potential mounts; these boxes are cycled out every three weeks.

l Mounts can be created using a variety of different basic materials, and some recipes even call for the use of other mounts as an element.

l You can also get them by purchasing starter packs or by buying them individually from the store. Both of these options are available.

You can win a mount by watching the Trove streams that you like the most. They may be kind enough to release some to their followers.

Other Travel options in Trove

Simply hit the space bar whenever you want to jump. I’m sure you would want to go higher. Double-tap the space bar to jump higher. Every Trovian has the ability to do a double jump, but you shouldn’t be satisfied with such meager heights. Equip a better gear to increase your Jump stat! The higher your Jump stat is, the greater the number of jumps you are able to do when in the air. It’s best to do two jumps. It is much, much better when your jump stat is twenty-five (and more!)

Look! Up in the sky! It looks like a bird. It looks like an aircraft. You are the one flying across the clouds on your very own wings! These slick new accessories, which were released with the Take Flight update, are an excellent way to survey your surroundings from a birds-eye perspective. Begin your collection immediately as there are many available.

Assume that your wings are a hang glider; you need to go up someplace high, point them upwards, and keep holding down the space bar. In little time absolutely, you will have mastered the art of gliding, banking, and diving like an expert.

Experience life from the comfort of your very own boat! Boats, which were introduced in the Fish ‘n’ Ships update, make it possible to embark on new kinds of marine adventures. You begin the game with a basic raft, but as the game progresses, you will be able to create a variety of other boats. (If you wish to control the open seas, a Galleon is a gem you need!)

On the Character (C) screen, just like with your land mount, you have the option to choose the watercraft you wish to utilize. When you come upon a watercourse, you can summon it by pressing G. Trovians do not have buoyancy, which means that as soon as you exit your ship, you will go right to Davey Jones’ locker. But don’t worry; if you can defeat the enemies that are lurking underwater and then press the G button once again, your boat will bring you back up to the surface.

When you combine a Mag Rider with a Mag Rail Track, you get an experience that is nothing short of exciting. You have the ability to create a Mag Rider and design your own Mag Rail course, complete with high-octane speed boosts and leaps that defy death. It’s also possible to compose your own very theme tune by layering the music over Musical Blocks! Locate any Mag Rail track, hit the X key, and you will instantly start rolling.

Dragons are a sort of mount and/or ally that provide players the ability to employ dragons to move across the world rather than using conventional mounts. They are allies with new and additional powers, unlike the majority of conventional allies, and they are beneficial for traveling both on land and in the air. Dragons maintain their visibility when in flight (except for Fledglings, who are simply mounts), however, the majority of dragons fly at a speed that is 5 less than wings.

To sum up, that’s all there is to it; by now, you should be familiar with how to get Mounts in Trove. So, let’s get this adventure started, shall we? Trove is waiting for you to explore, create, hop, fly, or ride into it now!

How To Get Sea Lanterns In Minecraft
Everything You Need To Know About Resident Evil Village
TechsnGames Awards Best RPG Games 2021 Selection
10 VR Game Experiences You Must Try Right Now
When Does Psyduck Evolve In Pokemon Quest
Tags: game Gaming