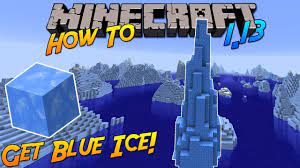 Blue ice is a solid block, although it is significantly more slippery than regular ice and packed ice. There was a 1.13 Minecraft update that included Blue Ice, which is a useful resource for constructing and traveling. Blue Ice, in contrast to ordinary ice, does not melt when exposed to light and transforms into basalt when it comes into touch with molten rock. Using Blue Ice to construct a boat is also an excellent technique to travel across the water more quickly.

The block’s texture is fantastic, and it’s perfect for winter-themed constructions. When it comes to producing new blocks that the Minecraft community would like, this one was a resounding success!

The blue ice block isn’t that difficult to get, you simply need to identify a cold biome where ice glaciers are generated and then begin mining, the blocks are usually dispersed at the glaciers’ center. There are other ways to get it, too, such as through crafting.

Whether you like it or not, the Blue ice block has improved many Redstone components and may be an excellent construction block when utilized correctly. Minecraft users can design their Mini-Games based on the block’s unique qualities! Now let me show you how to get blue ice in Minecraft?

How to get Blue Ice in Minecraft

Read on and follow the steps on how to get Blue Ice in Minecraft.

Frozen ocean biomes are home to large arching structures of blue ice that form naturally on the bottoms of icebergs. Snowy tundra village houses and ancient cities also produce it. Because snowy biomes are so common, getting your hands on this block is a sure bet.

Mining Blue Ice can be a simple process, but there is a drawback. Even in freezing environments, Blue Ice can only be mined using a specific apparatus.

Blue Ice may be found around glaciers or in the middle of glaciers, therefore find them first. Even a simple iron pickaxe can be used to mine if it is charmed with Silk Touch. The Blue Ice block will shatter if you use a standard tool to mine it.

In Minecraft, if you don’t already have a weapon enchanted with Silk Touch, here’s another method to get Blue Ice.

You could still get Blue Ice in Minecraft via trade. There is a 1 in 16 probability that a wandering merchant will sell 6 emeralds for blue ice. Snowy Tundra Biome Villages will begin to sell it in return for emeralds with the release of version 1.14.

How To Get Blue Ice in Minecraft: Is It Really Worth It?

The blue ice block is worth getting in Minecraft since it is very handy!

Using this block in restone projects opens up a whole new world of creative possibilities. This block has been widely used by players to construct lengthy routes linking their various fortresses. Redstone sorting systems of all shapes and sizes utilize the same block!

In addition to its aesthetic appeal, the block can be utilized to create a variety of unique snowy base designs in the game. As previously said, the only limitation to the potential applications of this block is your creativity.

How to use Blue Ice in Minecraft

Most things, including objects, will slide over blue ice. It is even more slick (a slipping factor of 0.989) than ice (0.98). The blue ice placed beneath the water current allows for faster movement of objects in water currents. On blue ice, mobs do not move quicker in water currents.

This is because, in Java Edition, boats can move at speeds of 72.73 meters per second (compared to 40 meters per second) over blue ice, which is far quicker than either regular or packed ice. For long-distance movement in all three dimensions, ice tracks made from blue ice, packed ice, or a mix of both are beneficial.

Any item may be placed on the blue ice, which is fully solid. Blue ice, in contrast to regular ice, does not melt when exposed to light. Basalt can be made from blue ice. Basalt is generated when molten lava flows into an area where blue ice and soul soil are present. When repeated, it becomes a “basalt generator.” Because it can’t be made back into packed ice, blue ice isn’t a storage block.

Considering that Minecraft is a large game with hundreds of different blocks and things available, it is possible to construct impressive structures in the world of Minecraft. Redstone is a resource in the game that allows you to construct functional frameworks, which transform the game’s dynamics.

None of these characteristics of constructing, nor the use of Redstone, are central to the Minecraft game. You can’t think of Minecraft without having visions of a building or Redstone frameworks go through your mind as well. In addition, the blue ice block comes in handy in both of these situations.

As a result, the blue ice block is often regarded as one of the most helpful building blocks in Minecraft. The latest nether update made it much more helpful since it can now be used to create a limitless quantity of basalt as well as autonomous bridge-building machinery in the nether, making it even handier than before.

Consider how important this is when you reflect that much of the underworld is readily traversable if you could walk on hot lava, and the blue ice block makes it possible for this to be the case.