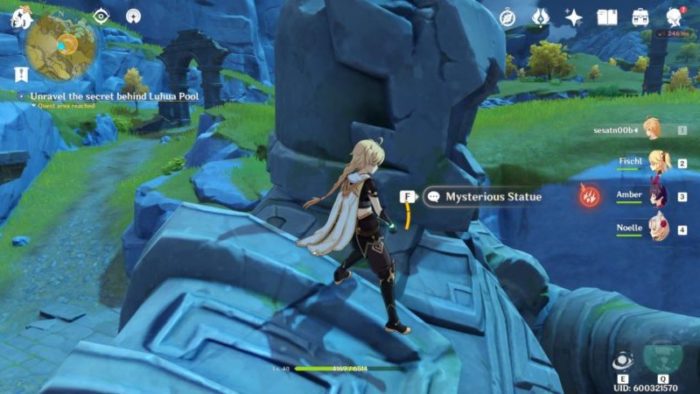 How Do You Unravel The Secret Behind Luhua Pool

An optional side mission in Genshin Impact is Luhua Landscape, which entails three stages: finding paints and brushes for Vermeer paintings, Look for a Strange Stone, and lastly, Unravel the Secret Behind The Luhua Pool.

The Genshin Impact Luhua Landscape quest’s three stages all take place around Luhua Lake in the same general location. Each one has a difficulty that you’ll have to address, though.

What is the Genshin Impact Luhua Landscape Quest?

The Genshin Impact Luhua Landscape quest’s three stages all take place around Luhua Lake in the same general location. Each one has a difficulty that you’ll have to address, though.

The whole of this quest can be accomplished within the vicinity of the Luhua Pool, and it can be finished in a reasonable amount of time for a significant reward. This is particularly beneficial if you are trying to quickly advance in Adventure Rank. However, given the foes that will be encountered along the route, it is quite certain that you will want your party to be at least level 25 before trying it.

How to complete the Genshin Impact Luhua Landscape Quest?

2. Look for a Strange Stone

3. Unravel the Secret Behind Luhua Pool

Find Vermeer’s paints and paintbrushes in Genshin Impact to accomplish the first part of the Luhua Landscape quest. If you’ve spent any time around the Luhua Pool region of Genshin Impact, you could have run with Vermeer the Travelling Painter, whether you’re there for the stunning vistas or to learn more about the ruin’s history. He will offer you the Genshin Impact Luhua Landscape quest line once you meet him, which begins with you helping the painter himself and ends with you exploring some ruins in search of treasure.

Right above the second “o” in “Luka Pool,” the paintbrushes may be found immediately west of Qiongji Estuary quick travel. You’ll notice a lot of books as you near the cliff’s edge overlooking the lake. You may notice a shining light in the corner of the ruins close to the enormous bag. They’re paintbrushes, of course.

See also  When Does Meowth Evolve In Pokemon Sword

If you’re looking for the paint, you’ll find it close to the waypoint west across the lake. Once you’ve arrived at this location, climb the cliff to the north and follow the signs. You’ll see a few more books and a bag in the distance. The paints are hidden behind a shrub on the brink of the cliff. Return to Vermeer with these two objects and hand them up.

Look for Another Strange Stone in Genshin Impact

The Genshin Impact stage in the Luhua Landscape quest, which requires you to Look for Another Strange Stone, is not too difficult. The game will indicate a rather tiny search radius for you, and from there all you have to do is simply uproot every single object that has a golden light around it. Some of them are indeed likely to be radishes and carrots, but you should have no trouble locating the rocks. It is important to bear in mind that while you are searching, you will come across some monsters; nevertheless, they are not likely to provide much of a challenge to you. You will find a description of the site where we discovered them further down. After you have gathered all of the Strange Stones, you should go back to Vermeer. This is going to be an intriguing ride.

Unravel The Secret Behind Luhua Pool in Genshin Impact

You’re going to have to scale the towering sculptures that are located close to Vermeer if you want to figure out what the mystery is about Luhua Pool and finish the Luhua Landscape quest in Genshin Impact. To begin, choose one of them to ascend carefully and gently so that you may maintain your stamina. You may put your hand on the buckle of the belt to give yourself relief. Once you have reached the head of the statue, you will need to interact with it and place one of the Strange Stones inside of it. I don’t believe it makes a difference whatever one you choose. To do this, first, select the Stone, then click the Submit button, and last click the Give button. Proceed to carry out the same steps with the second statue. Take advantage of the battlement behind them to reduce the amount of stamina you need to utilize.

After inserting both Strange Stones into their respective statues, descend to the ground level and make your way to the element node that Vermeer has been guarding. Bring out a member of your party that has geo abilities and give the node a good whack to activate it. You may choose to Resonate with Geo at the Geo Statue of the Seven, which is located south of the Dunyu Ruins, using the quick travel option if no other members of your group have Geo. You can then return. After activating the node, you will have only one minute and ninety seconds to dispatch three lower-level monsters; best of luck with that! Actually, the fight with the Elementals isn’t all that tough if you’ve got the correct party members fighting them “properly.”

The gate will only open if the Elementals have been vanquished by the party. At this point, the only thing left for you to do is make your way past the gate and rummage through the chest that is located in the middle of the room. This puts an end to the Luhua Landscape quest that was available in Genshin Impact. There is further wealth in the chamber; thus, you must eliminate the spiders and seize anything that you can get your hands on.

How To Get A Mount In Elden Ring?
Brawl Stars Tier List - Brawl STars Guides
2.6 Hog Log in Clash Royale – The 3 Classic Clash Royale decks that will not go out Of Style
How To Get Sea Lanterns In Minecraft
Steam Is Having Trouble Connecting To Steam Servers – 14 Ways to Fix It
Tags: game unravel the secret behind luhua pool