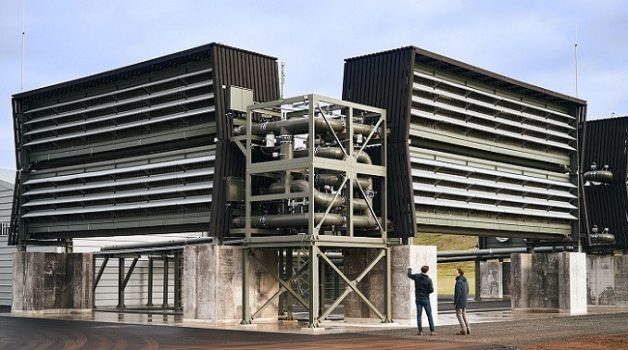 The windswept valleys of Mount Hengill in southwestern Iceland are dotted with geothermal springs and volcanic vents. Hikers all over the world visit this spot just to appreciate nature’s breathtaking scenery. Even sheep are photogenic on the Nordic horizon.

Somewhere in the middle, you’ll see a sci-fi’ish, metallic, Lego-like structure, with two rows of whirring fans running across each one. You can’t help but recall a famous sci-fi film during your childhood days.

Earthlings have emitted so much carbon dioxide that machines like these are being built just to literally suck them out. They’re like giant vacuum cleaners – but built to clean the world’s air, instead of just a house.

The launch of Orca has changed the way how we clean the air around us. According to Swiss firm Climeworks, the Orca plant – meaning energy in Icelandic – is the world’s largest carbon capture and storage facility to date.

Orca’s mission is to reach net-zero carbon emissions by sucking out greenhouse gases more than we could emit. And while experts say that facility won’t be enough to be a gamechanger, at least it’s the start.

The construction of the Orca facility is based on advanced modular technology. This makes it powerful and compact, yet Earth-friendly. And compared to the previous technology generation, the facility relied less on steel during construction. Aside from that, it can easily be expanded to allow it to easily be replicated worldwide on a larger scale. Strategically located near Hellisheidi Geothermal Power Plant, the facility fully runs on geothermal renewable energy.

See also  Vertical Aerospace Gets Pre-Orders From A $2.2 Billion Deal

Indeed, the Orca facility is the first-ever to successfully translate the vision of air capture and storage into reality. Its innovative design perfectly embodies the interconnection between nature and modern tech.

Aside from that, direct air capture is still an expensive tech. But it’s hoped that within a decade, the price will fall as it becomes global.

How The Carbon Capture ‘Magic’ Happens

It all starts when carbon dioxide gets sucked inside metal collectors containing chemical filters. At gas levels over 410 parts per million, large amounts of air pass through these machines.

The magic happens when CO2 in the air is neutralized with the alkaline inside collectors. After two to four hours, the saturated CO2 molecules on the surface of the filter get heated to 100 °C, making them “excited” before getting sucked out again.

Because of the high temperature needed to make that happen, Orca requires lots of energy to stay functional. Thankfully, the facility was built beside a geothermal plant, providing an almost unlimited energy source.

The machines at Orca are just another way of dealing with greenhouse gases. Other techniques involve capturing the harmful gases right from the source or removing it from fuel right before combustion. That involves exposing fossil fuels to jets of oxygen in a high-pressure setting to convert them into a mixture of hydrogen and CO2. The hydrogen can then be separated and burned with lower carbon emissions. However, methane emissions could sometimes be a problem when used on natural gas.

The carbon byproduct from the CCS can find its way in other applications, like for example, in the food industry, which uses CO2 to put fizz in beverages. But it first needs to be on a large scale to handle the demands of such industries.

These things happen only just a few hundred meters away from Orca’s main structures, where gas is mixed with water then injected underground. As a result, the gas reacts with the volcanic matter before mineralizing into rocks.

Expansion Is Around The Corner

Orca’s technological innovation in plant design enables it to expand in the future when needed. Since the carbon capture mechanics are now a reality, Climeworks is on track to ramp up its operations to find long-term partnerships with big names like Microsoft, Shopify, among others. It’s expected that Climework’s operations will inspire and support pioneering companies to act now and remove greenhouse gases before it’s too late.