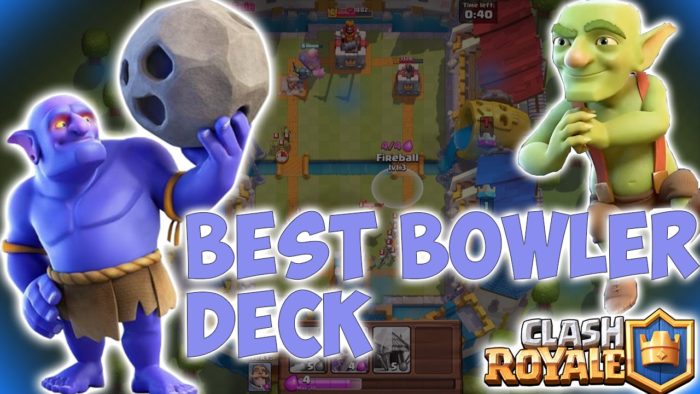 Bowler Clash Royale has several soldiers like Electro Dragon, Baby Dragon, Valkyrie, Minion, and many others.

These soldiers are divided into cards of diverse classifications, ranging from Common to Legendary. Bowler, one of the most popular ground troops in Clash Royale, is one such card. Bowler will be discussed in this post, including the different ways of using it and unlocking it.

The Bowler Card in Clash Royale Bowler is an area damage card with high hitpoints and impact, and they can be gotten from Arena 13 onwards.

The Bowler throws huge rocks that roll in a straight line, hitting and knocking back his target and any other units who happen to be in the path of the rock. The cost of deploying a Bowler card is 6 Elixir.

Due to the massive Bowler’s knockback effect, ground soldiers are forced to move out of the path, allowing heavy units such as Pekkas, Dark Princes, and other such units to be destroyed.

With a linear effect that impacts all troops, Bowler may easily knock out troops behind a tank or finish large groups of soldiers. Using the Tornado card, players should line up opposing soldiers to maximize the damage that Bowler can deal.

Bowler’s massive hitpoints and direct attack effects make him a particularly effective unit in attacks, as he can do massive damage to the tank and the support units in its backline. His inability to knock back tanks has the additional advantage of enabling him to divide the tanks and support units, making them simpler to deal with.

How to unlock the Bowler?

How to Use Bowler Card

To summarize, Bowler is unquestionably among the most powerful Epic cards in Clash Royale, and he is versatile enough to be used in a variety of combat strategies. It should be used to counter an adversary’s push approach.

Payday 3 Reveals 2023 Release After Successfully Finding A New Publishing Deal
Gameplay Tips for Kagura Mobile Legends
How To Melt Ice In Minecraft With Lava And Without Light
Best Cyberpunk 2077 Products That Will Cost 2 Grand And Your Dignity
Grab One Of Our Custom Gaming Frame Art Bestsellers To Start 2021 On The Right Track!
Tags: Bowler Clash Royale Clash Clash Royale Gaming